An electrocardiogram (ECG) is a recording of the heart’s electrical activity. It is totally painless and can be performed quickly. The heart’s electricity is detected by adhesive electrodes attached to the skin. The resulting measurements are referred to as leads. Various lead systems have been developed and improved over the past century from which electrocardiograms are transcribed. These include the lead systems from Einthoven, Goldberger, and Wilson.

Einthoven recorded the first ECG in the world in 1903. As there were no adhesive electrodes or intensifying systems available at this time, the only way to contact the body was to place the extremities in a bucket of salt solution. Einthoven was able to produce a sufficient contact resistance to the body to make the first ECG visible with the help of a string galvanometer. Einthoven could measure the tension between the right and left arm (lead I), the right arm and left leg (lead II), and the left arm and left leg (lead III).

As Einthoven’s leads were far apart from one another, Goldberger had the idea in 1942 to close this gap. The angle between leads I and II, II and III and II and I is 120°. To improve diagnosis, Goldberger thought it made sense to cut the angles in half, which he accomplished with the help of a resistor network. This corresponds to an analog calculation of the following rules:

Wilson further developed the ECG system in 1934 by adding a horizontal axis through the heart. He did this by attaching electrodes directly to the chest wall and measuring them against a virtual reference point, located in the middle of the heart. This reference point was called the CT (Common Terminal), and was generated from a resistor network. The Wilson leads are known as V1-V6, and portray the chest wall and the left side of the heart. Together with the leads from Einthoven and Goldberg, the 12-lead ECG was created. This lead system created the 12-lead ECG that is known today as the gold standard for ECGs.

The further development of lead systems has resulted in the classic 12 leads of today.

The focus was less on understanding the workings of the electrophysiology of the heart, but more on the phenomenological view of the heart’s electrical activity outside the body. In 1956 Frank described the heart as a rotating dipole within space. In principle, a rotating dipole is like a battery with a positive and negative pole spinning in space. Frank asked himself how this rotating dipole could most effectively be measured and described. He placed the electrodes on the body so that the measured leads X, Y and Z (see image 10) were placed in a row, thereby making a Cartesian coordinate system. This results in a representation in the form of a so-called vector loop. This corresponds to a 3D representation of the rotating heart’s dipole in space.

In 1988 Dower made Frank’s electrode system even simpler, as he reduced the number of electrodes to five. He was furthermore able to calculate the classic 12 leads from the vector loop. Dower thereby made it possible for classically-trained physicians to be able to read and understand the measurements from a vector ECG.

CardioSecur is based upon the EASI lead system. Dower’s lead system alone, however, still has the inadequacies of the 12-lead ECG, overlooking things such as posterior wall infarcts. CardioSecur provides 22 leads from the coronal and horizontal planes, providing additional information about the right and posterior walls of the heart, therefore closing the gaps of the classic 12-lead ECG. 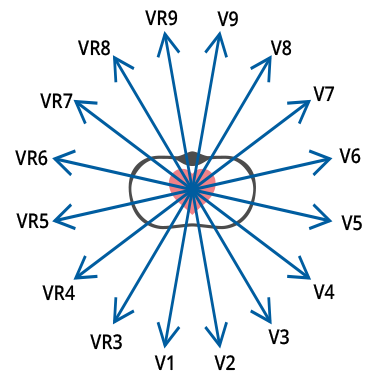 The first 360-degree view of the heart!

ESC guidelines recommend examination of the posterior wall. CardioSecur goes beyond standard 12-lead ECGs by offering synchronized leads for V7-V9 and VR3-VR9. This makes CardioSecur unique – and on top of this, it only uses four electrodes!

ESC guidelines recommend examination of the posterior wall. CardioSecur goes beyond standard 12-lead ECGs by offering synchronized leads for V7-V9 and VR3-VR9. This makes CardioSecur unique – and on top of this, it only uses four electrodes!

1-lead ECG systems are very common today. These systems may be used to record either a very long recording up to 14 days (like iRhythm) or a recording of merely a few seconds (like Alivecor). The medical relevance of one lead ECGs is very limited.

Diagnostic capabilities: ischemia cannot be recognized and the meaningfulness for detecting and localizing arrhythmias is severely limited. It can therefore be the case that disorders such as atrial fibrillation or extra ventricular beats will not be recorded.

3-lead ECGs are used most often for recording a 24-hour reading. A 24-hour reading is a frequently used tool for the diagnosis of heart problems and is reimbursed as a long-term reading.

Diagnostic Capabilities: ischemia cannot be recognized and the informative value of arrhythmias is severely limited. Disorders such as atrial fibrillation or extra ventricular beats may not be recorded.

A 12-lead ECG combines the lead systems from Einthoven, Goldberger and Wilson, thereby providing information about vertical and horizontal axes. The 12-lead ECG is the gold standard for ECG diagnosis and is used for both resting and stress ECGs.

Diagnostic Capabilities: with the 12-lead ECG fundamentally all heart activity can be measured, and both rhythmic and ischemic abnormalities can be diagnosed on the anterior heart wall. However, according to guidelines, the posterior and right heart wall leads should also be measured when a heart attack is suspected. In practice, this is almost never done. This can be due to time constraints, usability problems and lead placement issues, as well as a lack of education. For example, it is very cumbersome to attach electrodes to the back of a patient experiencing an infarct.

The vector ECG views the heart as a rotating dipole. This can be described via the three mutually perpendicular axes of a Cartesian coordinate system. The rotating dipole in space is represented in the form of a vector loop.

Diagnostic Capabilities: until today, Frank’s vector ECG has represented a superior diagnostic possibility. Various ECG changes, e.g. a posterior infarct, are visible on a vector ECG but not on a classic 12-lead ECG. However, this method, although superior, has not caught on, as interpreting the 3D vector loop is extremely difficult and most literature and diagnostic teaching traditionally refers to the classic 12-lead ECG.

The EASI lead system is based upon the vector loop of a vector ECG, with the classic 12 ECG leads being calculated from this vector loop.

Diagnostic capabilities: the EASI lead system has the same diagnostic capabilities of a 12-lead ECG; however, it is measured using only four electrodes. The model construction may lead to minor deviations between the two systems, most specifically in absolute amplitude or axis. However, these deviations do not have a medical significance for the diagnosis of the ECG.

The 360° lead system is based, as with the EASI ECG, on the vector loop of a vector ECG. In addition to the classic 12 ECG leads, the leads of the right and posterior heart can be calculated, making it an all-encompassing 22-lead ECG. It is the only ECG system that enables physicians to be 100% compliant with the cardiology guidelines without reattaching electrodes, which require anterior and posterior analysis of the heart.

CardioSecur uses lead technology that offers a 360-degree view of the heart and complies with cardiological guidelines.

Diagnostic Capabilities: with 22-leads, the diagnoses of the classic 12 leads can be clearly broadened. The possibility of diagnosing infarctions is maximized, as infarcts of the posterior and right heart wall can be equally diagnosed. In addition, the localization of heart rhythm disorders is finally possible. 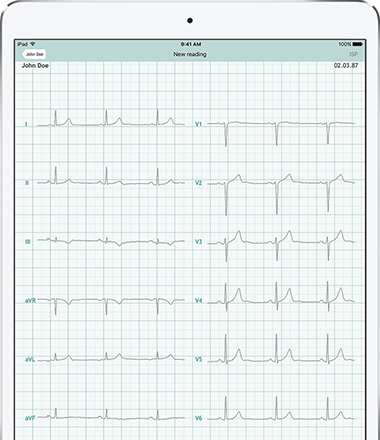 Mobile electrocardiogram with 12 or 22 leads

CardioSecur Pro is the only 22-lead ECG with just 4 electrodes. Among others, it can be used to diagnose anterior, lateral and posterior wall infarctions.

CardioSecur Pro is the only 22-lead ECG with just 4 electrodes. Among others, it can be used to diagnose anterior, lateral and posterior wall infarctions.

One cable. One app.

Your mobile, clinical quality ECG.
With direct feedback.
Always know what to do.